Even in the toughest times, you can still celebrate the moments that matter with friends and family.

Our virtual gift registry offers you the chance to sprinkle some kindness and spread the love in support of sick kids and the Hospital heroes who care for them.

Send a Wish You Were Here postcard, a Baked with Love birthday cake, or a Handpicked for You bouquet to let the special people in your life know you’re thinking of them.

Your generous gifts will help make each day better than the last by funding vital equipment, life-changing research and world-class care for patients and their families.

How to spread the love in five simple steps:

‘Wish you were here’
Postcard

Send this simple gesture overseas or down the street. This postcard will help brighten your loved one’s day in record speed.

Treat the birthday girl or boy to our guilt-free, super tasty homemade cake. With endless servings and no expiry, you’ll spread joy all year round.

‘Handpicked for you’
Bouquet

Grown with lots of love and care, our special bouquet of flowers will help brighten their day, week and year. With a simple touch, the bouquet can reappear and even last forever. And don’t worry, they bloom in every season. 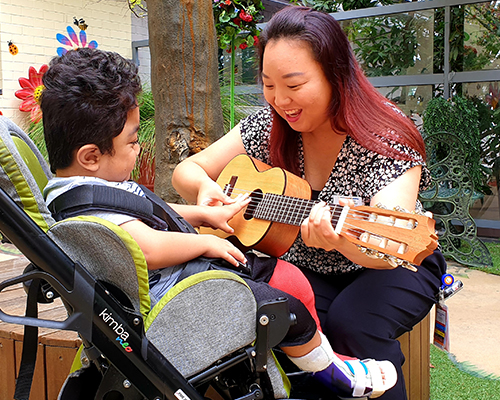 For Harvey’s mum, Diana, music is a part of everyday life. Her husband and two older children, Jazmyn and Marcus, play everything from the drums, to the guitar, keyboard to vocals and regularly hold family jam sessions at home with Harvey in the front row. And, thanks to the support of Music Therapist, Monica Lee, the family’s love for music is echoed on the wards of Sydney Children’s Hospital, Randwick whenever Harvey visits for an appointment.

“Every day Harvey’s surrounded by music at home and to have that at the Hospital too is just amazing. Because he’s non-verbal, music gives him his own voice and a unique way to express himself. In a recent music session with Monica, she noticed he can pick up on the beats. Whether it’s strumming the guitar or playing the drums, he’s just mesmerized by rhythm and sound of the music. Just to see that smile and hear his cheer during those sessions brings me so much joy and happiness.”

Diana found out she was pregnant with Harvey at six months. Just two days later, she noticed something wasn’t quite right, so went straight to the doctors. By the time she got to the emergency room, she found Harvey was already on his way. 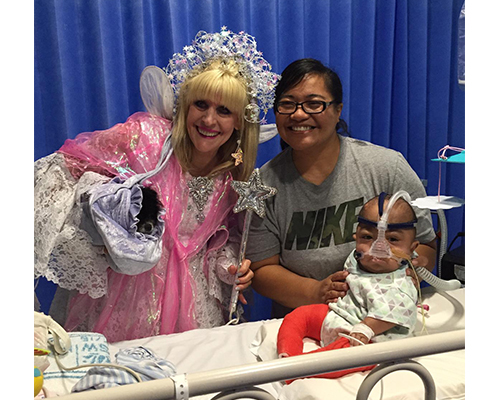 “Harvey was born at 26 weeks and immediately taken to NICU as he was born with very complex issues. He had a rocky start with his breathing and we soon found out that he had arthrogryposis. Even though they told me how serious his condition was, I realised that I was ready for the journey ahead.”

Arthrogryposis is a rare complex disorder which occurs approximately 1 in 3,000 births. It causes limited movement in joints such as the hands, wrist, elbows, hips, knees and feet as well as muscle weakness and delayed development. Children born with arthrogryposis often need a lot of physiotherapy and in more severe cases like Harvey, multiple surgeries.

For the first six months of his life, he was cared for by the intensive care unit team. After being on a ventilator for half a year, Harvey overcame all the odds and started to learn how to breathe on his own again. It would take many more months before he could breathe fully unsupported but in June 2017, two months later, he was finally allowed to go home with a machine that would help him to breathe, called BiPAP.

Due to Harvey’s complex condition, the family continues to have regular appointments at the Hospital to see the wide range of doctors involved in his care, from neurologists, to orthopaedics, to ophthalmologists, physiotherapists and the palliative care team. 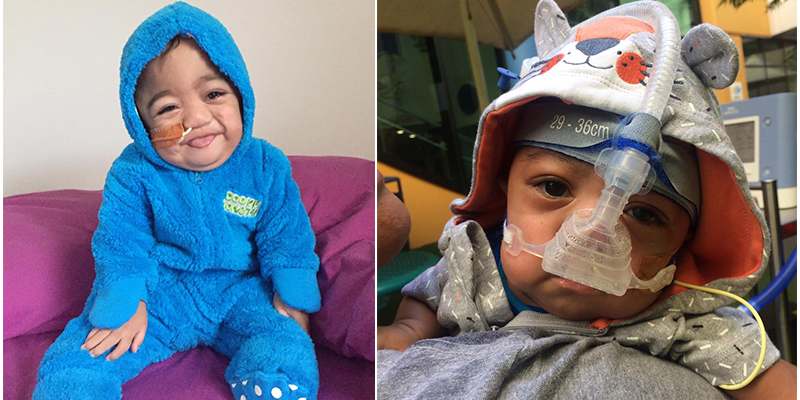 Now a little boy of three, Harvey has already undergone more than 10 surgeries; the first when he was three weeks old to fit a Rickman’s Reservoir – a device that can be implanted into the brain to help release the pressure of a bleed on the brain.

Throughout his Hospital journey, Monica has built up a very special relationship with Harvey, using the power of music to help distract and bring comfort during the most difficult times.

“Harvey loves spending time with Monica, especially when they sing songs with actions – one of his favourites at the moment is Baby Shark.

“She’s amazing. No matter where we are, she’ll come and find us with her instruments, and you can see the excitement in Harvey’s face when he sees her and the Music Therapy team.

“Whether it’s strumming the guitar, beating the drum or making music on the iPad, it’s such a great way for him to interact with other people and brings that sense of familiarity and comfort when we’re away from home.”